Why Are You Playing Banjo-Kazooie

Due to a future project which might involve a light amount of 3D platforming, I have been replaying a few 3D platformers as research. Mostly to look at how they organize their use of space in establishing a level’s identity, how players are directed around the space.

I first played Hat in Time (2017), which is a recent non-AAA release. Polished, but quite visually noisy in most of its areas. It’s hard to visually parse and features gigantic, busy, and often cramped environments. There’s tons of pickups everywhere you look. Telling of this is the fact the very first ability you get is to show you where your next objective is. From the levels I played (up to the 4th chapter with the mountains) I will say that at least there were some good landmarks for navigation, and the individual missions felt distinct and interesting… but I think this kind of mission structure may just not be for me.

Then I turned on Super Mario 64 (1996, N64) for the first time in years. I had somewhat idealized it as a champion of ‘box garden’ design, but the structure of picking a star, doing it, being booted from the level – felt dry to me. The movement (and I know I am about to commit a Game Criticism Sin), to be honest, with the N64 controller, feels clunky and indeterminate. Wall jumping is a nightmare, as is trying to navigate the Bowser levels without feeling like you are one weird input away from just falling to your death. I will say that movement on open fields feels nice. Triple and long jumps are great.

But to me, the idea of having missions that guide you as to what to do, feels more like quests in an open world rather than exploring and uncovering a ‘box garden’. Banjo Kazooie feels like a much stronger example of box garden design, as I’ll get to shortly.

Then, I turned to Spyro the Dragon (1998, PSX) – which I had thought was kind of similar to Banjo-Kazooie and M64, but it turned out to be much different than I had assumed.

To see what its levels feel like – watch the below video of a late-game level at 2x speed. One problem with the general level design is that it can be hard to tell where you are due to the vague looking tunnels and outdoors spaces. Since Spyro moves so quickly, perhaps the levels ended up being somewhat big to account for this, which would lead to a higher difficulty of players creating mental landmarks, since you are seeing relatively indistinct architecture at each moment. In addition, you’re mostly killing hordes enemies or collecting gems – neither of which are particularly memorable when it comes to remembering a space. And once you ‘complete’ the level, it feels quite dead and empty…

Spyro the Dragon reminds me of how we would ‘activate’ flat and open space in Anodyne by adding simple enemies. Effective and engrossing, maybe, but not that interesting.

I will say that there are layers and shortcuts/hidden paths in Spyro the Dragon – one of the first levels, Stone Hill, consists of spaces that are depressions in a large hill. Surprisingly the game lets you run around on the upper ground looking over these depressions. It gives a strange feeling of violating the borders of the game’s world. But, it didn’t hold my interest past the first few hours… a better Spyro the Dragon would have taken advantage of the interesting crisscrossing paths, removed the crazy number of gems to collect, reduce the combat (which is not that engaging), and maybe focus more on finding dragon statues.

I’ll be posting about BK in three parts, for three of its levels each. A primer about Banjo Kazooie: You play as an anthropomorphic talking bear “Banjo” with a talking bird, “Kazooie”. Your sister has been kidnapped by a witch. The witch wants to take the sister’s beauty, and make herself beautiful. Of course, this is at the top of a tower in the witch’s lair, which is also right next to Banjo’s house. To get through the lair, you need to find many of the game’s 900 musical “notes” and 100 gold, jigsaw-shaped “jiggies”. These are hidden in 9 ‘open-box-garden’ levels you enter from the witch’s lair. The lair functions as a hub world you progress deeper into. You also need to learn new moves such as flying, invincibility, etc., and transform into small creatures.

Jiggies are used to open new levels, notes are used to progress through ‘note doors’ in the lair. To open a level, you need to find the corresponding ‘jigsaw puzzle’ for the level, give it a needed # of jigsaws, and then find the level’s entrance.

Jiggies are either rewards for challenges (minigames, short boss fights, finding 5 of some special collectible for the level), or are hidden in challenging places. Notes must all be picked up in one go – if you don’t get all 100, and leave, you start from zero. However, Notes are usually not hidden in an obscure way, and often are used to draw your attention to the major landmarks of a level (at least, so far, four levels into my playthrough.)

Already from reading how the game lays out its goals and resources, you can tell there’s a strong core loop to the game: uncovering more of the hub world involves exploring more of the levels.

Mumbo’s Mountain is almost a perfect 3-course meal. It is potentially the rough start to a beautiful children’s game of short, 30-minute long levels with recognizable landmarks and simple but satisfying challenges. Of course… it’s not. The levels in BK get longer and larger…growth, 10x-ing, raising more levels of seed funding… games – the levels always get bigger, huh?

Here’s a playthrough of the level. 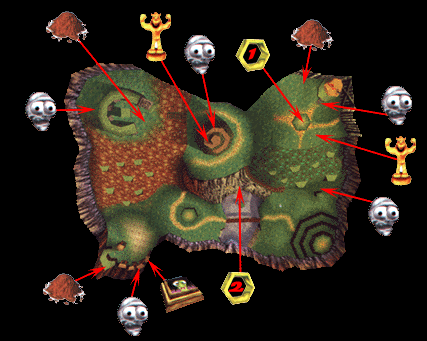 (Note: the silver skulls are tokens which are needed to transform you into a creature.)

I’m not going to waste too much time about normal game design analysis of how the level teaches you stuff, but focus more on the feeling of the space. You can’t tell from the map but you start in the bottom-right, and the top half of the map is elevated. The center horizontal chunk of the map is all slopes of varying steepness. The level can be clearly separated into a few landmarks: the SW monkey-palm-tree region , SE fields/river region, NW ruins, NE village, central termite hull, and the large slopes on the left and right. Each has a different set of challenges.

The overall effect is this cozy, small landmark tour. You never feel overwhelmed or lost by the scale, part of this is also thanks to how the level takes place in a large depression (look at the cliff walls surrounding the level.)

I love this level: I don’t know if I would necessarily make a game with the kind of collection mechanics BK has, but I do love how each area has a different feeling yet works together as a whole. 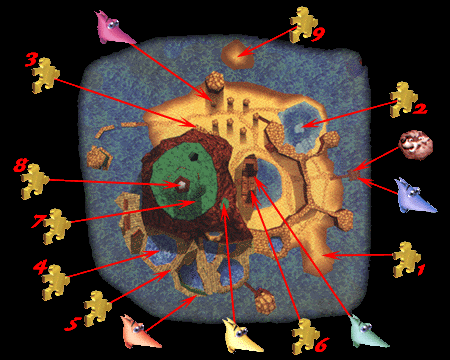 (Note: the bird heads are 5 colored “Jinjos” which you need to collect to get a Jiggy.)

The landmarking here is still distinct, yet a little harder to parse at first. One issue here is the gigantic mountain that takes up a lot of this level , and the raised walkable rock structures. Still, we have some nice variation, especially in verticality here: the S part is a series of stepped pools, there are some climbable structures in the W side, the N side has high-jump pillars, there’s a mini-game in the top-right, the bottom-right is a small boss fight, and we have a central Pirate Ship . There’s also the Huge Landmark of the level – the big mountain, which has a lighthouse on top as well as a large opening beneath it which allows you to cross from W to E in the level.

This kind of size can quickly become dangerous, but because there is not too much layered verticality to the level, and most of the action takes place on a ring-sized shape outside of the center (rather than equally throughout the level’s map), it doesn’t become too overwhelming. 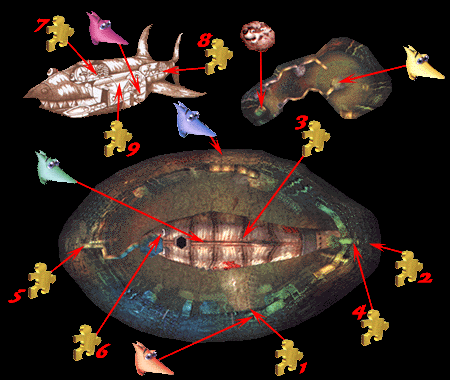 The strangeness of this level didn’t really strike me until playing it now, at 25. It’s a garbage dump, but the garbage disposal is this disgusting mechanical/organic fish thing.

Using the right-image as reference, you start in the S, swim through to the central chamber, which has “Clanker”, the big meat-machine-fish. This is kind of a hint as to how later levels will increasingly feature separate spaces that become harder to keep track of.

The central cavern has a nice structure – you climb or swim around the perimeter of the chamber’s oval-shape, and sometimes go through tunnels to find stuff. However, tunnels are tough to make – they’re easy to get mixed up and you forget where you go sometimes, especially since you access these tunnels via swimming.

You do a lot of swimming in this level, which sucks and makes it hard to orient yourself. Eventually you can enter Clanker, which is a linear layout with a few challenges. It’s a cute concept, but features… swimming. Still, it’s a good concept of building-in-a-building: it’s really clear as to how you enter or exit Clanker.

In part 2 I’ll talk about the next 3 levels, in which fatigue of the game starts to set in. I have always gotten kind of bored around the 60% mark in BK, but I’d like to investigate why.